Do you want to learn how to play Blackjack? It is actually a remarkably simple game, and this is probably why it is so amazingly popular. It was originally called “21” because the object of the game is to get the necessary cards to have a hand worth twenty-one points. 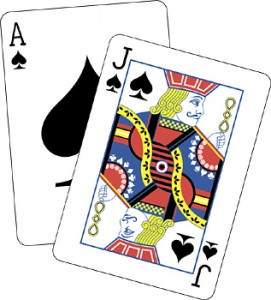 When you play Blackjack you should begin with a single-deck game. This makes it somewhat easy to understand how to use a strategy when playing. First, the dealer will give each player two cards in a “face down” position, and then give themselves two cards as well, but with the second card facing upward.

The cards are all assigned specific values, with the Ace being worth one or eleven, the face cards worth ten, and the numeric cards worth their imprinted values. The Ace’s value is usually determined by the player and it allows them a bit of flexibility in their choice of moves.
For example, when you play Blackjack you are trying to get to twenty-one without going over that figure and while getting closer to it than the dealer. To do this, each player has to decide if they want to “hit”, “stand”, “double down”, or “split” the hand they were dealt. The most common choices are to hit or to stand. To hit, the player taps the table with a finger and the dealer gives them a card. They can continue to do this until they “bust” or until they indicate that they want to stand by moving their hand horizontally over their cards.

After each player has had their turn, the dealer must try to hit twenty-one or get closer to this figure than the players. Clearly, the dealer is working at a bit of an advantage because they don’t often have to be as aggressive as the players, but there are certain strategies that players can use to frequently beat the dealer without tons of risk.